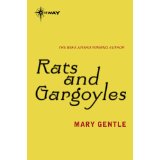 I had heard good reports of this book, but about fifty pages into it I had begun to fear that I had exposed some hype, that the Emperor was, after all, rather scantily clad. How so?
Mary Gentle is, clearly, very bright. She was too restless at school to do anything but write and play truant, and left as soon as she could. An early novel, HAWK IN SILVER, was published by Gollancz shortly after. She did many menial jobs before returning to full-time education at the age of 26, studying for a BA and, latterly, a Ph.D. Her early reputation was based on a surprisingly small number of books: only three: GOLDEN WITCHBREED, ANCIENT LIGHT, and a short story collection, SCHOLARS AND SOLDIERS. The latter contains, in two novellas, the germ of RATS and GARGOYLES.
I had come to this book with expectations raised by some extensive media coverage and reviews, including a half-page feature in the Sunday Correspondent, and also enthusiastic reports from acquaintances, not to mention a reading of Gentle’s earlier ANCIENT LIGHT. At the outset, I found RATS well done, but resembling, disturbingly, a superior Swords and Sorcery, with no single character emerging as the protagonist. It gets better, though. The city at the Heart of the World unfolds, (in its five quarters, North, South, East, West and Aust). At its heart is the Fane, a cathedral, or black abyss, home of the Thirty-six Decans, the Gods, or demons, on Earth. The helpless human populace are ruled by sentient and courtly Rat-lords, and a guild of masons labours to enlarge the Fane. The humans hope to dislodge the Rat-Lords, while the Rat-Lords scheme among themselves and hope to rid themselves of the Decans. The Decans have a swarm of demon-acolytes, winged reptilian horrors with a tendency of crushing dissent with fang and claw. Other, odder things are going on below and, as they say, at sea.
The previous novels GOLDEN WITCHBREED and its sequel ANCIENT LIGHT have a more conventional narrative style; formally SF, they have all the richness of character and description of a fantasy novel, and fairly obviously, they are about colonialism. The apparent formlessness of RATS is therefore all the more disconcerting. The cast of characters is rich and strange, a dashing Rat-Cardinal, Plessiez; a Rabelasian Lord-Architect, Casaubon; Lucas, a prince attending the University of Crime; a couple of Scholar-Soldiers; a blonde buxom lamdlady; the Rat-Cardinal’s fur-tailed girl protege Zar-bettu-zekigal, and her mage sister; and an underworld female pretender to the human Imperial Dynasty, lurching about in plate armour like some crazed Joan of Arc. There is a raffish young lecturer at the University of Crime who promises to be a major protagonist but soon fades, and some clerics who worship trees.
None of these is the major protagonist; indeed there isn’t one, and the author reveals in an interview with Colin Greenland* that this uniquely democratic state of affairs is entirely deliberate. The scene cuts sharply – snip! – from one part of the storyline to another several times within a chapter, requiring the reader to look sharp. The story has much to do with magia, medieval magic, Masonic arcana and Masons, and a rotting of the fabric of things. Some of the artefacts, the steam-trains, the microphones, the oily siege-engines, are of a refreshing modernity. For half of the book one has little idea what is going on, plotwise; then it gathers itself, the plotting thickens and there are dire events, culminating in the tumbling of the Fane. One is never sure who are the bad guys. Perhaps, one thinks as one explores, there aren’t any. Can it really all end badly?
There is a great deal of originality here, inspired by Gentle’s researches (this is one of the few novels to have a Bibliography as an appendix), and a refreshing absence of the usual fantasy tropes and cliches. The descriptive style is, as in the WITCHBREED novels, rich, even obsessive. Constantly, ears are scratched, tails coiled, clothes spattered, bodies smell of sweat and feel the summer heat (often), clothes are besmeared with mud and other substances, skirts flash, characters move restlessly and so on. Adherents to the autobiographical theory of criticism will care to note that Gentle is herself a redhead, like the Scholar-Soldier White Crow, and a keen participant in swordfighting and battle games.
One might wish that more had been made of the modern elements, to give the book a contemporary resonance, but there is much in it that is very fine. And there are more ideas in one chapter than in a whole shelfload of Dragonlance and its ilk. A book, perhaps, more for those for those who see Fantasy as literature than for those who read Fantasy to immerse themselves in imaginary worlds.