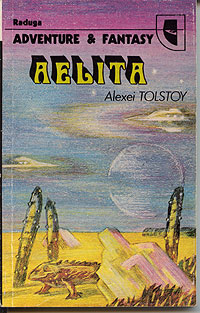 At the Sou’Wester Eastercon some years ago I bought two books from a stall manned by Russian fans. These books, published in the USSR (sic) by Raduga Publishers, Moscow, and printed in English, looked like interesting mementoes of the ‘Con’.
Both are by Alexei Tolstoy (1883-1945), a distant relative of the author of “War and Peace.” Alexei Tolstoy is one of the most widely read authors in Russia, highly regarded there both for his science fiction and for his epic historical works.
AELITA (1923), though not well known in the West, is a famous book in Russia and one of the Russian SF clubs is named after it. A movie version (still occasionally shown)) was made in 1924.
At the opening of the novel, in Petrograd c. 1920, Archibald Skiles sees an advertisment posted by the engineer M.S.Los, asking for volunteers to fly with him to Mars. Skiles interviews Los, and sees the experimental spacecraft, a complicated and hi-tech device by 1920’s standards. While Skiles is at the workshop, a volunteer, Red Army soldier Gusev, introduces himself. Gusev, unlike the other two, is no intellectual, but a restless, practical sort, who is quite ready to desert his wife for a new adventure. Los, a widower, is equally ready to go and face possible death.
Los’s experiments are funded by the Soviet State, so the launch is attended by a group of officials and newspaper reporters. The ship makes a swift passage to Mars and lands safely. Their speed has been such that their watches record a passage of 19 hours, though 24 days have passed on Earth.
Los and Gusev find that Mars has breathable air, and the immediate surroundings are a desert with cacti. They find signs of cultivation, and realise that they are walking in the bottom of a dry canal. They soon make contact with the inhabitants, who have flying machines, and are captured and brought to first a city, then an isolated house. During the flight they see mostly ruins and desolation. During their detention, Gusev talks of plunder and of annexing Mars to the Russian Federative Republic, while Los talks of gathering wisdom.
Soon they are introduced to a graceful young Martian female, Aelita. With some Martian technology resembling video she starts teaching them the language, and is subsequently able to narrate them some Martian history; a history of conflict, of invasion from Earth by Atlanteans.
A love affair between Los and Aelita develops. They learn that a faction of the High Council, led by Aelita’s father, means them no good. A revolution starts in the city, and Gusev, the man of action, escapes and joins in. Aelita’s father, Tuscoob, escapes into an underground labyrinth and launches a destructive counter-attack. Los and Gusev escape. In the final scene, Los is back on Earth, listening to Aelita’s voice calling to him by radio.


has a number of rather larger-than-life characters: glamorous femme fatale Zoya Montrose, Rolling, a rapacious American capitalist, and Garin, a mysterious engineer who soon displays ruthless tendencies. Following an unexplained murder of a man who turns out to be Garin’s double, Garin is pursued to Paris by Shelga, a Petrograd detective, and the nature of Garin’s activities and his deal with Rolling and his ultimate aim is gradually revealed. Garin, in fact, has invented a heat ray powered by chemicals which burn to produce intense heat. The rays are focussed by a ‘hyperboloid’ to destructive effect. (Any physicists among you may object that it should have been a paraboloid; according to the foreword Tolstoy was well aware of this and used the hyperboloid as a symbol of artistic exaggeration.)
Garin uses the ray ruthlessly first to aid Rolling’s capitalist schemes and then to further his own fascistic plan for world domination. Once he gains control of Rolling’s wealth he uses it to occupy a small Pacific island and drill down to the magma belt in search of gold. When the gold, in huge quantities, is recovered to the surface, Garin uses it to destroy the economy of the United States.
The novel starts in Petrograd and the scene shifts to Paris, Germany, a yacht at sea, the Soviet Far East and other locations. The story is accompanied by technical details and sketches which even today seem quite plausible by popular SF standards and must have seemed more so in 1925 when our knowledge of physics and the earth’s crust was less advanced. Tolstoy’s education was engineering-based.
The hardbacked edition of GARIN which I obtained has unusual full-page colour illustrations, most of which are rather good, being painted in a vigorous modern and in one case decidedly art-deco style. (Artist unknown).

In contrast to Zamyatin’s WE (1920), which most SF fans these days would find rather tough going, both Tolstoy’s novels, despite their age, are highly readable, full of tension and spectacle, with rather larger than life characters and the kind of technical details that these days would be labelled as cyberpunk.
Though written in the 1920’s, GARIN accurately foretold the rise of the likes of Hitler and Mussolini and the Japanese warlords. Reading this novel, one is reminded more than a little of Michael Moorcock’s ‘Byzantium’ novels in which the characters and the ambience are not too dissimilar.
As befits Soviet novels of the 1920’s they are written from a perspective which embraces socialism with enthusiasm and attacks capitalism and fascism. The socialist perspective is a novelty these days; but one should after all reflect that while socialism eventually failed in the East, capitalism has yet to show any success in improving the lot of ordinary Russians.
Unfortunately neither of these novels is currently in print in the UK. I have not been able to ascertain if Raduga are still operating in Russia.
Apparently GARIN was published in the USA as THE DEATH BOX and an out-of-print UK edition of AELITA exists. But anyone wanting to swap books with Eastern European fans might well enquire there.