The Sense of Style – The Thinking Person’s Guide to Writing in the 21st Century: Stephen Pinker, Penguin £9.99, 360pp. 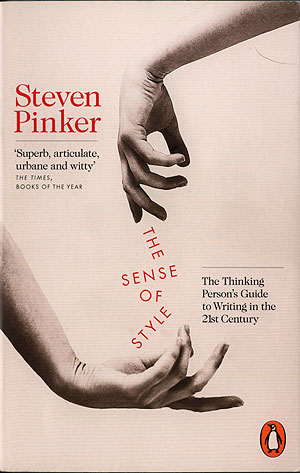 What is good prose? There is no shortage of advice on the subject, and plenty of books on writing style. If that wasn’t enough, opinions vary, from the style nazis who quote lots of awkward rules, to the other extreme.
Pinker says that he loves reading style manuals, but goes on to say that he thinks a lot of them miss the point and are based on a shaky understanding of grammar.
He does not think that writing was was better in the old days, but that style still matters for getting your intended point across.
Major chapters include examples of good writing, how to avoid writing bureaucratic and other stuffy prose, how to avoid ‘the curse of knowledge’ and avoid baffling your reader, understanding syntax, and how to ensure that one idea follows another in a clear way.
The final chapter relates how to make sense of the rules of grammar, word choice and punctuation. This is the most interesting chapter, as Pinker lists which rules make sense and which are fairy tales and should be ignored. Some ‘rules’ arise from a mistaken notion that rules that apply to Latin ought to apply to English.
This is a most useful book which steers a middle course between free for all and overly prescriptive ‘rules’. Pinker is no self-appointed ‘expert’, but is Chair of the usage panel of the American Heritage Dictionary, and the author of several books on language.