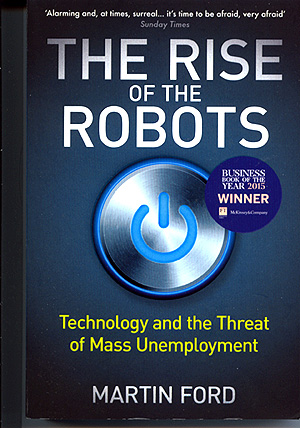 Technology and the threat of mass unemployment.
Whenever a new machine is introduced to replace human labour, we are told that this is progress, and that the humans displaced will find less deadening jobs elsewhere, that they can be retrained to work in other industries, and so on. Who still believes this? For many people, the search for a job entails hundreds of applications and futile visits to the jobcentre, and for those in work, it means a struggle to make ends meet on the minimum wage or a zero-hours contract. Well-paid jobs for blue-collar workers or for the middle classes are disappearing. Why? What is happening?
Martin Ford’s book provides many of the answers. The replacement of mass employment by automation has been going on for many decades, and the effects have garnered little public attention. It’s only when one is forced to look at ‘then’ and ‘now’ that the differences are apparent. Films of factories taken fifty or sixty years ago show thousands of workers streaming out of the gates in cloth caps and filling the streets. The typical new facility of today is an automated factory, or a vast datacentre in which you’d need a sniffer dog to find an employee anywhere.
As Ford points out, advanced technology systems being developed today have the potential to make almost any routine job, whether in a workshop or at a keyboard, obsolete. Mass production in factories is now largely automated, and a host of other jobs are under attack. Driverless cars are news, and in a few years will be threatening hundreds of thousands of jobs. If you can summon up a driverless car to take you where you want to go, who needs taxi drivers? Or delivery van drivers? Or do you need to own a car at all? If you don’t, the number of cars required to serve the population will be far less. Meaning fewer dealerships, filling stations, car parks and repair shops. The disruption caused by Uber will be as nothing compared with this.
A popular job for newly qualified lawyers is searching for documents relevant to a legal case. This can be automated too.
Do you eat at McDonalds? There is one in Milton Keynes where the row of clerks at the counter has been replaced by rows of terminals where patrons can select and order their meals. Catering is one of the remaining providers of mass employment (admittedly not well paid) but this too is now under attack.
There are statistics that show how while the number of people in the labour market is rising, the number of hours worked stagnates, and the wages and salaries paid remain static or fall.
The trend is clear enough and leads to a future in which a super-rich elite holds most of the wealth and the remainder of the population struggles to find any work or gain any income. And how will this affect the economy? A capitalist economy needs mass consumption, but robots don’t consume, and people on the breadline consume very little. The outlook for the economy is not good.
To put it plainly: No jobs = no spending = no mass market = no economy.
Ford offers a possible solution – that all citizens be given a guaranteed income so that they can feed and house themselves, and carry on participating in the economy, even if they don’t work. the cost of this could be met, Ford suggests, by reassigning the sums spent on jobseekers allowance, housing benefit, disability benefit, etc, and their inefficient administration, increasing the taxes on the rich and making international corporations actually pay some tax. Surprisingly, this has been looked into in a small way in a few countries, but I’m not holding my breath for this to happen in the UK or the USA any time soon. You can easily deduce how Tory politicians will react to this idea, since they have not grasped that Austerity is having the same effect on the economy as the destruction of employment…
Read this book.